It was a lovely day on Monday, slightly cooler I thought, so why not head off down the rio Chillar to the first of Nerja’s waterfalls.

As it turned out, it wasn’t really any cooler and I was very glad I finally decided it might be a good idea to pick up a bottle of water from the supermarket on the way.

I joined the river from calle Puente Nuevo at the spot where there might just, one day, be a new Health Centre. It’s all there, except for the actual building of course. A favourable (political) wind and who knows?

The rio Chillar has been flowing all year, and not just a trickle, which is highly unusual. Someone must have left the tap running.

The original plan, as far as I am aware, was to restore not only the river area in the town itself, which has been done, but also the outlying areas. This plan, though, seems to have suffered, along with the area itself, during the Great Flood of September 21st 2007. The signs are still there, but a bit overgrown now.

The water is clear, and in many ways it is nice that it is a bit on the wild side. The only sad thing you notice, and this seems to be everywhere these days, is how people don’t seem to think twice about throwing their rubbish all over the place.

Bags, bottles, cans…you will even occasionally find the odd discarded fridge, TV or sofa, items it would be far easier to dispose of in the proper manner. However, no fridges today and the sofas have been removed, just a few bottles, cans and a number of shoes.

Since the time of the floods, many properties can only be reached by fording the river and many impromptu bridges have sprung up along the way.

Under the old aquaduct, still in use, and on we go, past all the sugarcane.

At this point there is a tarmac road to the right which leads up to the Almijara area of town, another good point for joining the river.

There was a whole host of grasshoppers/cicadas/jumping things at one point, who were not prone to posing for a picture, but I did manage to get one shot. 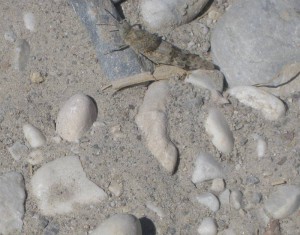 There were also a few large dragonflies, but that was mission impossible.

Under the motorway bridge and past a dwelling carved into the cliff face. This cave house is still in use. Must be quite cool in summer.

Continuing along the track we arrive at another junction. Up the hill to the right and then turning right takes you on a tarmac road up to the San Juan de Capistrano area and is the road you would probably use if driving to the waterfall. Up and left is an alternative route to the waterfall, although we’re staying down by the river.

It was at this point that I came across this chap. Absolutely fascinating to watch. Have seen a lot of snakes in this area, some one metre or more in length, but chameleons are few and far between.

The cement factory is now in sight and just before the factory it is time to leave the river, turn right, go up the hill about thirty metres and then up a small track on the left.

And voilà, we have the waterfall in all its splendour. Great for a cooling dip!

Total walking time, at a very leisurely pace and stopping to take photos and to talk to wildlife, roughly 40 minutes.

It is also an area with some very good views – while you contemplate the walk back!

September 16, 2010
Comments Off on A walk to the waterfall
Features
Latest Nerja News   Rio Chillar   walk   waterfall
%d bloggers like this: