The "Balcony of Europe" was named, legend has it, by King Alfonso XII in the 1800's. 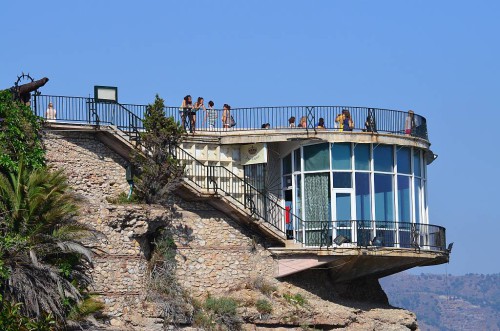 Today it is the focal point of the town, affording magnificent views up and down the coast. Looking left and down you have Calahonda beach and neighbouring coves, followed by Burriana beach and, in the distance, the picturesque village of Maro, site of the impressive Nerja Caves. To the right you have La Caletilla beach, El Salon beach and the rocky promontory at Torrecilla beach. The Balcón de Europa is also the location for various concerts and ‘fiestas’ throughout the year, including the ‘not to be missed’ New Year celebrations with firework displays, music and dancing until dawn.

Most of the processions through the streets of Nerja, of which there are many, either start, finish or pass through the Balcón de Europa.

The Promenade – Paseo Balcón de Europa – is  completely pedestrianised, as are the adjoining streets (calle Puerta del Mar, calle Pintada, calle Cristo and calle Carabeo) and it is lined with cafés, restaurants and ice cream parlours. In the summer months is a hive of activity. At night the Balcón de Europa comes alive with artists, the odd musician and is a place where people just wander to relax and soak up the atmosphere. It’s a great place to wander on a summer evening, or any other evening for that matter, and there are plenty of watering holes to choose from. In the adjacent Plaza Balcón de Europa you will also find a lot of bars and restaurants, such as El Candil, Bella Roma, El Patio, Julie’s Place, Doña Lola, Centurion, Lizarran and a few more besides. And if that’s not enough choice, there are dozens more within a couple of minutes walk. See Nerja Bars and Restaurants. King Alfonso XII (1857-85) was king of Spain from 1874 to 1885 and was the son of Isabella II. He went into exile with his parents at the time of the revolt of the Carlists in 1868 and was educated in Austria and England.

In 1870 his mother abdicated her rights in his favour, and in 1874 he was proclaimed king. Supported by Martínez de Campos and Cánovas del Castillo, he consolidated the monarchy, winning greater popularity for it than it had enjoyed under his mother or grandfather, Fernando VII.

He was a victim of the cholera epidemic of 1885. His widow, Maria Christina (1858-1929), was regent during the minority of his posthumous son, Alfonso XIII.

Being life-size and accessible, the statue of the king is a great favourite with visitors for photos . Next in line in the ‘posing’ stakes are probably the cannons. The Church of El Salvador – Iglesia El Salvador – is a lovely building situated on one edge of the Balcón de Europa and close to what used to be the Guards Tower. There are also of couple of fire-pieces from days gone by. Down the central promenade, on the left, is a sculpture to commemorate the discovery of the Nerja Caves – Cuevas de Nerja – by five local lads from the village of Maro.

There is a local urban legend that if you stand in the central circle of the star at the end of the Balcón de Europa (on the raised section) and make a wish (but not for a lottery win or the like) then your wish  will come true.