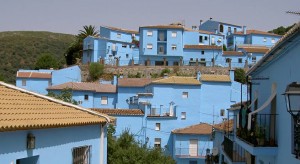 Júzcar, a small town of just 250 inhabitants about 22 kilometres from Ronda in the Serrania de Ronda district of Málaga province, has just celebrated its first anniversary as the ‘First Smurf Village’.

In the spring of 2011, Sony Pictures chose the ‘white village’ (Pueblo blanco) of Júzcar for the global launch site of the movie ‘The Smurfs 3D’ and the town was painted blue, including the local church and cemetery.

This small town was transformed into a tourist attraction and instead of the normal 300 visitors per year, 80,000 flocked to the town in the first six months and around 130,000 over the whole year. The flow of visitors has been steady throughout the year.

New businesses have sprung up all over the town, including a tea house, gift shop and sandwich bar, and there are plans for a pizzeria, a bank and even a clinic.

In December 2011, Sony Pictures offered to repaint the town white, returning it to its original state, but the local population voted overwhelmingly to stay ‘blue’. They know it won’t last forever, but for the moment they are enjoying their 15 minutes of fame, and who can blame them?