Sunday April 27th 2008 was the eighth annual Dia del Residente, Residents Day, in Nerja and we take a look at yesterday’s event as well as reviewing some of the changes that have taken place over the years.

This year’s Dia del Residente took place on a new site, a brand new site in fact, Plaza Paseo Nuevo. This is new square built on top of the underground car park close to the Balcón de Europa.

Having attended most, if not all of the previous events, the first impression was one of ‘space’. There was room to breathe. There was just more room for everything, from stage area to eating area, there didn’t seem to be the usual hustle-bustle associated with previous years.

Over 50 local organisations took part and it was nice to see some new faces amongst the participants. Not that one doesn’t want to see the old faces, of course. Keep digging! Amongst the newcomers were the newly formed Nerja Bowling Club, the local self-help association for the disabled, Afadine, and Nerja Riding for the Disabled who provide free horse riding for the children on a weekly basis.

Looking back to the early days of Dia del Residente there are a number of obvious and major differences as the event progresses and evolves.

Back in those early days, in a marquee tent on the Balcón de Europa, participants would set up their stalls, literally, and pack them with all sorts of freebies, including food and drink. It was all very experimental and, basically non-commercial in those days.

The whole concept was the brainchild of the late Bryn Davies (picture 1 and below), a highly respected figure in the local community, and I’m sure he would be proud to see that his work has been carried on and that the event has grown in stature over the years. 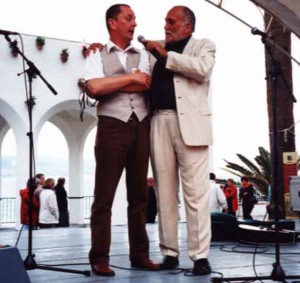 Dia del Residente then moved to the Parque Verano Azul, a much larger site, but with a few changes. There was still the marquee tent, but the stalls themselves gradually stopped the practice of individually providing free food and drink as organised food and drink stalls took over.

This year, no marquee tent and a spacious area for people to sit and eat the local delicacies as they watch the entertainment. The stalls themselves have become very professional-looking over the years and the whole event has developed into quite an important showpiece for many local organisations and charities.

Some things, of course, haven’t changed with the passage of time. The Municipal Band still opens proceedings, we still have the same mayor and the evergreen Mike Bond, legend in his own lunchtime, is still the ‘King of the Stage’.

One area that could, perhaps, do with a bit of attention is on the coordination side of proceedings, something that has been mentioned on many occasions by different people, including participants, this year being no exception.

Stage management, basically, for the want of a better phrase. Someone to make sure, for example, that the Municipal Band knows exactly when (and even where!!) it is supposed to be playing, to ‘manage’ the entertainment so that no-one is hanging around, not ready or absent at the wrong moment and to provide continuity and a smooth-running, continuous and varied programme.

And now the video.