US troops are to be allowed to use social networking websites such as Twitter and Facebook following a review of internet use and security, with Defence department officials saying that the benefits of using social media now outweigh the risks to security.

Many sites, including YouTube, were blocked by the Pentagon in 2007 but under the new ruling will be unblocked.
Commanders will, however, still be able to temporarily block access to safeguard missions or save bandwidth.

Only last year, the US Marine Corps renewed a ban on accessing Twitter from its network and the army also maintained a list of banned social sites.

Incidentally, chairman of the US Joint Chiefs of Staff, Admiral Mike Mullen, has a Twitter account with 16,330 followers as of today (Saturday Feb 27th 2010). 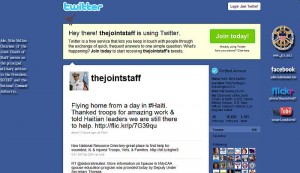