A dead dolphin appeared on Calahonda beach on Wednesday morning and after examination by an environmental health unit it was removed by CREMA (Centre for the Recovery of Endangered Marine Species) for further examination. 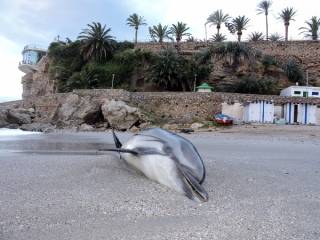 It was an adult dolphin 1.80 metres long 115.5 kilos in weight and parasites were found in its system, suggesting cause of death could have been contamination.

During 2014 only two dolphins were washed up on Nerja beaches, one of which was found alive on La Caleta beach and was subsequently returned to the sea.

In Málaga province, between 40 and 70 dolphins and sea turtles are rescued each year. Those found dead tend to have died from natural causes or interaction with human activities, such as fishing, maritime traffic or pollution.