Under clear skies, an unusual occurrence, the annual feria got underway yesterday evening, everything pretty much according to schedule, another minor miracle. 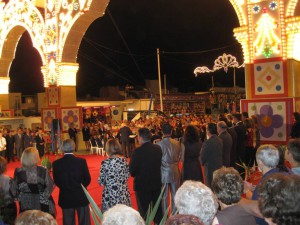 Proceedings began with the Municipal Band, under the leadership of José Pedro del Pino, followed by the ‘pregón’ (opening speech), this year delivered by Paco Haro. He was introduced, as is customary, by the pregonero from the previous year, in this case Carlos Campos.

Paco Haro is a ‘feria child’, born on October 10th 1950, and is well known in the community for, amongst other things, his work on local radio and, in recent years, local TV. Paco began his local radio adventures in 1983 and continues to this day and there are probably not many who have not heard his voice at some stage or other.

His other great passion is ‘feria’, and Paco has been an active member of the Comisión de Fiestas since 1984.

He reminisced about his early life, his first recollections of feria and recalled friends and family, some of whom are no longer around, before finishing with an emotive poem by Isabel Jurado. Throughout, Paco used the Municipal Band to great effect to punctuate his speech.

After the speech, Paco was presented with a commemorative award and then the Councillor for Fiestas, José Miguel García, took centre stage for the ceremonial switching on of the feria illuminations, declaring the feria officially ‘open’. Fireworks then filled the night sky.

One or two new rides at this year’s event, the object, as ever, seemingly being to try and part revellers with the contents of their stomachs. And with some success, it has to be said. Not a pretty sight!

OK, own up all those who expected to see someone being reacquainted with their lunch! GROSS.

In the Caseta Municipal, all attention was on the selection of the Reina de las Fiestas (Feria Queen) and Caballero de Nerja (Knight).

Alejandra Muñoz was not only elected Reina de las Fiestas but also took the titles of Miss Elegancia and Miss Fotogenia. The Primera Dama was María Cádiz and Segunda Dama was Ana Elena Narváez.