Swifts nesting in the window shutters is one thing (amazing how they swoop into such a small crack without ending up with a headache) but, and avoiding clichés like the plague, pigeons are a completely different kettle of worms.

The Council may be about to put up a few signs saying ‘no pigeons’, so perhaps it is time to follow suit. It all started at the end of last year.

A pair of pigeons decided to take up residence on top of a tall cupboard on my balcony, starting to build one of their flimsy nests. They then departed after a short time, just leaving behind the remnants of the nest, if you can call it that.

A few months ago, they returned. Well, one assumes it is the same pair although it isn’t easy to tell. Anyway, this time they made more effort with their nest and it looked like they were intent on producing an egg so, out of the kindness of my heart, I decided to let them stay a while.

Probably a mistake. Did you know, by the way, that the female pigeon will only lay the egg if she can see another pigeon? It doesn’t even have to be a real pigeon, apparently, and could even be her own reflection in a mirror!

Definitely a mistake. Pigeons really are the messiest of birds and it is going to be a mammoth cleaning and disinfecting job once they go/are evicted. They are friendly enough, they will sit right next to me, but they are sooooo messy. 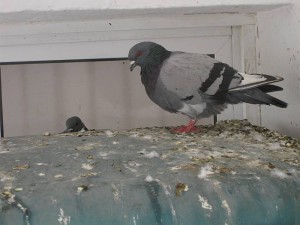 The idea was to let them produce the chick and then, when the youngster leaves the nest (7 to 28 days), evict them and clean up the area. However, it just seems to be taking such a long time and I’m beginning to wonder if these two birds are, in fact, just having a larf.

That is, of course, assuming it is the same two birds all the time! I’ve taken their mugshots, but it doesn’t help!

Amazing. After one year, I just accidentally discovered that when viewing pictures, my camera adjusts the picture from portrait to landscape through ‘flipping’. Hope that is what it is supposed to do, anyway! Must get round to reading the manual one day.

May 19, 2010
Comments Off on The dilemma…
Strictly Local...or not
Latest Nerja News   pigeons