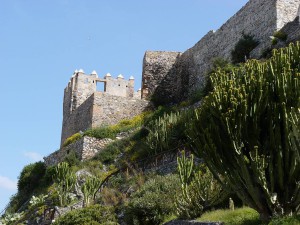 Dominating the skyline above the coastal town of Almuñecar, in Granada province, are the ruins of the old Castillo de San Miguel – San Miguel Castle, a once mighty Moorish fortress.

The fortifications were originally built in the 1st century B.C. by the Phoenicians and Romans (Lori Sexi is the old Phoenician and Roman name for Almuñecar), but it was during the Moorish occupation that it became a huge fortress with forty towers and three gates.

On 15 August 755, Omeya Abd ar-Rahman I of Damascus, founder of the Emirate of Córdoba, arrived in Almuñécar from North Africa to establish his Arab kingdom.

The Moors introduced the growing of sugar cane, developed the fishing industry, built many of the streets and buildings of the old town and strengthened the castle which became the stronghold of the city and the seat of government.

During the Nasrid Dynasty in Granada, the castle was used by the rulers as a sort of seaside retreat.

Castles always have dungeons and this one is no exception. You can look down into the dungeons and imagine the discomfort of those poor condemned souls, some of whose bones remain in the pit today. The castle was captured by the Christians in 1489 during the reconquest of Spain and a cross on ‘Peñon del Santo’, the rock at the old harbour entrance, marks the defeat of the Arabs, their surrender at Almuñécar, and the return of Christianity. The castle was extensively rebuilt, heavily fortified and given the name San Miguel by the Christian King Charles III.

During the Peninsular War, part of the Napoleonic Wars, the castle was occupied by French troops. On May 27th 1812, the British warship HMS Hyacinth, acting in collaboration with Spanish partisans from Nerja, began to bombard the castle, destroying many of the internal buildings.

The French garrison fled and HMS Hyacinth then attempted to render the castle unusable. Unfortunately, they did not achieve their objective due to the fact that their gunpowder had become soggy.

The castle, though, had seen its last days as a military stronghold and following a cholera outbreak in 1830 it became the town cemetery. It continued to be used as a cemetery until 1986.

From 1986, the restoration process began and still continues today. It is a long, slow process.

There is a small museum with a few artefacts and several of the excavated areas have been labelled, such as the baths, dungeon, towers and so forth. There are also a couple of cannons lying around. 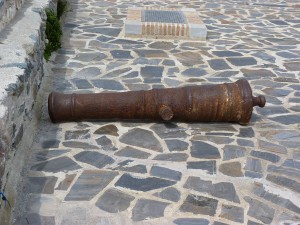 There are some great views from the castle, especially down to the beach area.

The San Miguel castle is open as follows: