Bill Bennett wrote to M&S asking for a refund after he was mistakenly charged £3.00 for a £1.90 salmon sandwich at a store in Taunton, Somerset. Mr Bennett received a reply offering him a gift card, but it never arrived and so he wrote again, cheekily asking for a ‘hand-drawn picture of a smiley dinosaur’ to compensate ‘for the inconvenience’.

Mr Bennett fully expected his request to be ignored, but it wasn’t. He duly received his gift card and a hand-drawn sketch of a smiley dinosaur, courtesy of Steve Jones, a Customer Service advisor. 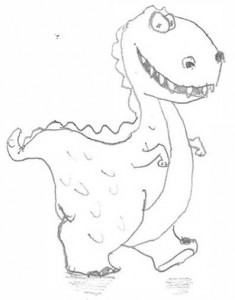 Steve Jones, in his reply to Mr Bennett, did point out that art had never been his strong point but hoped he’d enjoy the drawing anyway.

This really is what Customer Service is all about and if more people reacted in this way the world would be a far happier place. One or two such incidents have been occurring recently, so there is hope for the human race yet. The Greatest Customer Service Story Ever Told, Starring Morton’s Steakhouse