It was a bit cloudy at times and the wind was frequently blustery but it didn’t adversely affect the San Isidro celebrations which went ahead as scheduled…not that scheduled times are ever really relevant when it comes to processions in Spain.

Hours before the procession was due to start, the floats were lined up nose to tail down avenida Castilla Perez and round the corner into calle Málaga, everyone getting into the party mood.

The procession set off, not too far behind schedule, with the horse riders and the magnificent oxen in front and wound its way slowly to the Nerja Caves. At one stage, just as the tail of the snake was entering the Balcón de Europa, the head was at the Maro roundabout, giving you some idea of the number participating.

Crowds lined the entire route, with parties going on all over the place. Not quite the throngs of past years as there are discernibly less visitors in town at the moment, but a multitude nonetheless.

Up at the Nerja Caves, the mayor and other Councillors did their bit by serving drinks. 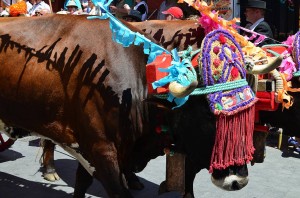 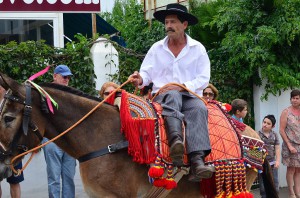