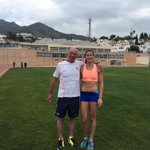 Nerja continues to host elite stars of track and field, the latest being young Welsh 400 metre runner Seren Bundy-Davies. Last month Seren won the women’s 400 individual bronze at the European Indoor Championships held in Prague losing out on the silver medal by just 100th of a second, although she did get her hands on a silver medal as part of the successful British women’s 4×400 relay team at the same meeting. In February, Seren ran the third fastest women’s 400 metres of 2015 with a personal best time of 51.72 seconds, so she is clearly a name to watch out for at the Rio Olympic games next year! Seren is not a total stranger to Nerja however as this is the second consecutive year she has trained at the Enrique Lopez Cuenca stadium.

So guys, be extra careful when attempting to outrun any of the many lady joggers on the long Nerja to Maro stretch in the morning… you might just be taking on one of the fastest women in the world!!