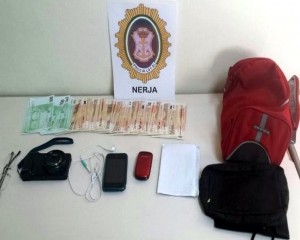 Nerja Police recovered a sports bag containing almost 6,000 euros that a British man had found near the Supersol supermarket near El Capistrano.

While the police were checking vehicles on the nearby roundabout, a man approached them with a sports bag containing €5750.00 and mobile phones, among other objects, stating that he had found the bag next to that Supersol supermarket.

Once the police returned to the station they made various telephone calls to the contacts that appeared in a diary that was in the bag, and thus located the owner, a Dutch man. The owner then presented himself at the police station and the bag and its contents were returned to him.