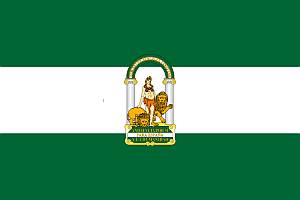 Andalucía Day is a regional celebration which takes place on February 28th each year and commemorates the establishment of the autonomous region of Andalucía following a referendum held in 1980.

Andalucia Day is a regional public holiday and each town has its own, and quite varied, celebrations.

The flag of Andalucia, pictured left, can be seen proudly displayed all over the place, on public buildings, in bars and on the balconies of many private homes.

In Nerja, there is normally an official declaration at the Town Hall by the Mayor and members of the Town Council followed by ‘Dia del Pedal’ – Day of the Bicycle.

The ‘Day of the Bicycle’ idea has been adopted by quite a number of municipalities, being both fun and a healthy passtime.

In many schools in the region, the day prior to Andalucia Day often involves the pupils partaking of an ‘Andalucian breakfast’, generally consisting of bread and olive oil, participating in various events relating to Andalucia Day and the singing of the Andalucian Anthem.

The anthem of Andalusia has its origins in the ‘Santo Dios’, a religious song sung by farmers from various parts of the region at harvest time. Both lyrics and music were recorded by Blas Infante, considered the father of Andalucian autonomy, and the composer José del Castillo Díaz adapted and harmonized the melody.

Continue reading for the lyrics to the Anthem of Andalucia.