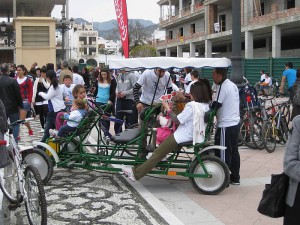 February 28th is Andalucia Day and in Nerja, in addition to the official commemorative acts, it is also Dia del Pedal – Day of the Bicycle.

The Dia del Pedal now starts and finishes at the Plaza de España (formerly Plaza Paseo Nuevo), just behind the Town Hall and participants are of all ages and the bikes are of all shapes and sizes.

The route is not strenuous and it’s not competitive, it’s just a leisurely bit of fun cycling round the town with food and refreshments when you get back.

Several local establishments and organisations, such as the Taller de la Amistad, offer bicycles in a prize draw held at the end of the event. Photos from this year’s event can be seen HERE.