Had to make an early morning pilgrimage to the bank, pay a few bills, so popped down to Calahonda beach. Very peaceful. The local fishermen were busy cleaning some of their catch…with a lot of willing helpers around!

And they were rewarded. There were a few early morning bathers around. 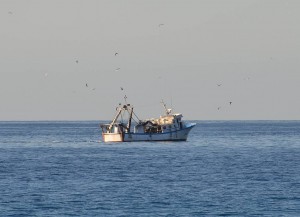 And the moon was still up, probably a late night in Tutti Frutti.