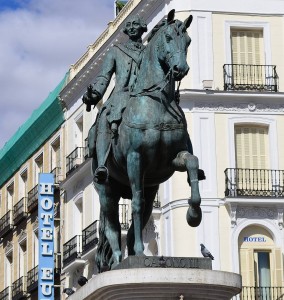 Madrid is an interesting, beautiful and vibrant capital city and right at its heart is Puerta del Sol, probably one of the best known and busiest areas of the city.

The Puerta del Sol – Gate of the Sun – was originally one of the main gates in the city wall that circled Madrid in the 15th century. As one might suspect, this gate faced east and greeted the rising sun each day.

From the 17th to the 19th century, the area was a popular meeting place for people wanting to hear all the latest news as the Post Office, the first in Spain, was located in the square.

The Post Office was built by the French Architect Jacques Marquet between 1766 and 1768 and became the headquarters of the Ministry of Interior and State Security during the Franco era. It is now the seat of the Presidency of the Madrid Community. 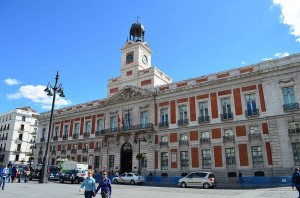 On the front of the building are two plaques, one commemorating the first battle with Napoleonic troops in 1808 and the other in honour of the victims of the March 11th 2004 terrorist attacks on commuter trains. 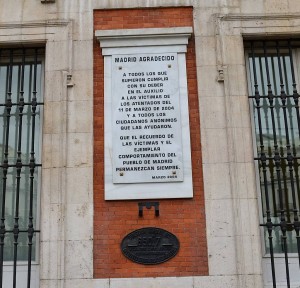 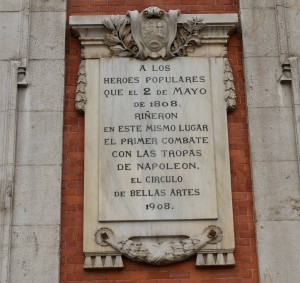 In front of the former Post Office, on the pavement, is a plaque showing the symbolic centre of Spain, kilómetro cero, and is the base point for the numbering of the road system in the country. 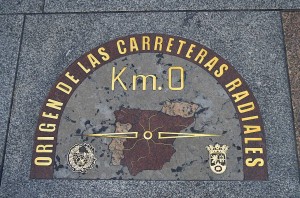 On the eastern side of the square is a statue of a bear and a madrone tree, the heraldic symbol of Madrid. 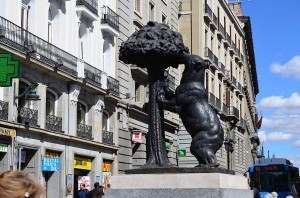 The bear used to be on the northern side of the square, but was moved in 2009.

At New Year, it is the bells of the church in Puerta del Sol which traditionally sound at midnight and are broadcast ‘live’ throughout the country to start the eating of the 12 grapes. At least this has been the case since December 31st 1962. 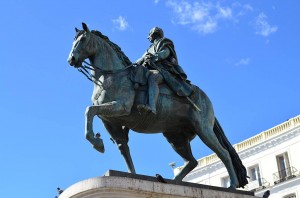 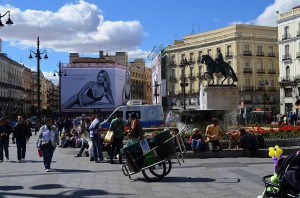 Beneath the square lies a public transport hub served by lines 1, 2 and 3 of the Madrid Metro, a commuter service inaugurated on June 27, 2009. The project was somewhat delayed, by four years, due in part to the discovery of the remains of a church during the excavations.

Puerta del Sol is a lively place, day or night, and street artists of all kinds abound, from living statues to Mariachi bands. It is a fun place just to sit, relax and watch the world scurry by. 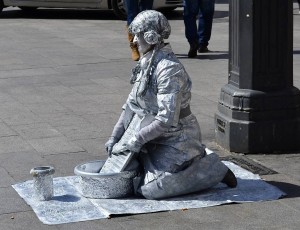 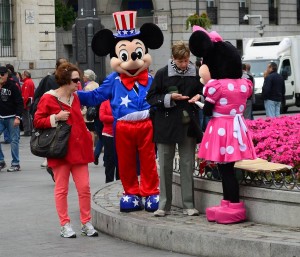 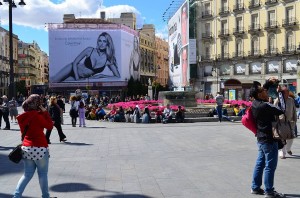 Puerta del Sol has also been a focal point for various demonstrations, ranging from protests against the Iraq war to objections to austerity measures. On such occasions, the police presence is quite noticeable. 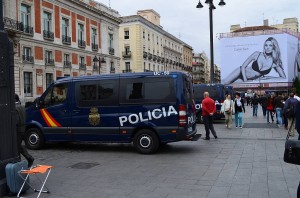 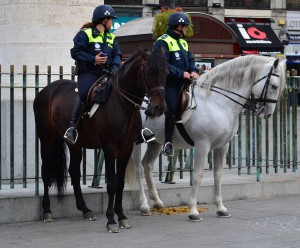