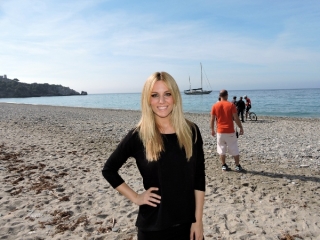 Spanish pop star Edurne was in Nerja yesterday shooting scenes for the official video of the cycling Tour of Spain 2015 (La Vuelta de Espana) at El Canuelo beach in Maro. The video features Edurne’s new song ‘Amanecer’ (‘Dawn’) which is the official song of La Vuelta 2015 which will ride through Malaga on August 24th.

However, perhaps more significant than this is the fact that Edurne will represent Spain with the same song at the 2015 Eurovision Song Contest which is being held in Vienna on May 23rd in front of an worldwide television audience of over 125 million viewers.

Watch out for Maro on the official La Vuelta 2015 trailer appearing on spanish television soon!