The Nerja Book Centre in calle Granada 32, Nerja, is celebrating its 35th birthday tomorrow, Thursday October 8th, and between 17:00 and 20:00 you can enjoy cava and cupcakes while you browse. There is also a free raffle with a number of prizes. 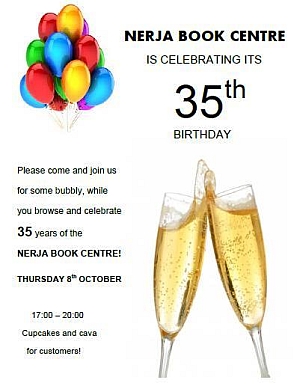 The story of the bookshop:

In 1977, it was not only the year of the first general elections in Spain since the death of General Francisco Franco but also the year when Derek Hands took the momentous decision to leave his work as a Social Services Mental Health Specialist in the UK and start a new life in sunny Spain.

After a few months relaxing in the picturesque area around El Chorro, Málaga province, Derek moved to Fuengirola where he opened what was only the second English bar in the town, The Harbour Lights.

Three years later, however, Derek decided it was once more time to move on and try his hand at something different. He moved up the coast to the fishing village of Nerja and, armed with a couple of hundred books and a sense of optimism, he opened the Nerja Book Centre in calle Granada 30.

The system was a simple, but innovative, and remains to this day. Buy a second hand book with the option, when you have read it, to return and get half the marked price towards your next purchase.

It was a simple idea but one which proved highly popular, not only for holidaymakers looking for something to read on the beach without having to fill their luggage with heavy books, but also with residents of the area.

Not everything is a good idea or goes smoothly, of course, but that doesn’t mean you shouldn’t give it a go, as was the case when Derek decided to diversify by also offering bicycles for rent. However, it quickly became apparent that this was not one of his better ideas and he soon dropped the scheme.

The next major change, and a diversification, came around twenty years ago with the opportunity to take over the locale next door. This he did and turned the new premises into a Video Club, not only offering all the latest videos for rental but also hiring out TV’s and VCR’s to those who needed them.

Over the next few years, videos were replaced by DVD’s and Derek kept pace with the changes in technology until, about eight years ago, he decided it was time to close the Video Club and concentrate on his main passion, the books.

This decision was based upon a general decline in the video and DVD markets and the fact that getting hold of all the latest releases had become an extremely expensive business and one that could not be sustained.

The Nerja Book Centre moved next door to the newer, more practical premises of the Video Club. Those who visited the old, original bookshop will remember its labyrinth of narrow passageways with books in every nook and cranny and an easy place in which to get lost, and some did!

Derek continued to build up the Nerja Book Centre and it now boasts around 30,000 books in all categories and in 15 languages, the main ones being English, Spanish, German, French and Swedish. There is also a large selection of ‘collectors’ items, such as first editions, signed and rare copies which Derek has painstakingly built up over the years.

The cheapest books in the shop sell for €0.90, the most expensive is a signed and inscribed First Edition of the 14th Dalai Lama’s autobiography which is priced at €1,000.

The Nerja Book Centre has now been in business for thirty-five years, its simple concept seeing it through the various economic upheavals when others have long since fallen by the wayside.

On August 30th 2011, having guided the bookshop through thick and thin for thirty years, Derek decided it was now about time for a life of leisure and the reins were passed on to his son, 24 year old Leslie, a case of ‘Hands to Hands’.

Leslie is now carrying on the family tradition, keen to see the labours of the past thirty years continue well into the future while at the same time taking the shop forward to embrace the ever-changing times.