It was Tuesday morning, the sea mist was rolling back and forth as if it couldn’t make up it’s mind, so what better time to head for the recently reinstated weekly market in Nerja.

Waiting for a bus is a bit like waiting for a kettle to boil, but one did eventually arrive and, packing up my camp bed, I clambered on board.

Extra buses, or mini-buses, are now operating to and from the market, and are even labelled ‘mercadillo’. I was, though, surprised at how few people were on the bus, maybe half a dozen. And no-one else got on en route.

When the market was in the centre of town, it was usually pretty crowded by 9:30, but at 09:45, when I arrived at the new ‘mountain’ site, there were not many people about at all and many of the stallholders were still in the process of setting up.

The official start time of the market is now 10:00, which would explain a lot! 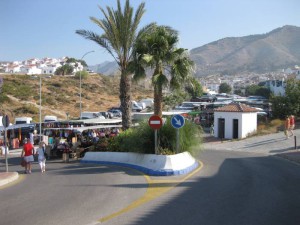 The new site, a bone of contention for ten months (and still is!) and the cause of bitter arguments, is certainly quite spacious and several people commented that it no longer felt ‘claustrophobic’. True, it wasn’t the normal ‘let’s play sardines’ scenario.

It wasn’t until about 10:45 that the place began to fill up a bit, although the numbers were still not on the large side. However, it does seem to be improving week by week according to people in the area. Maybe the fact that it is a bit more spacious and spread out gives the impression that there are less people about than one would normally expect.

One of the complaints put forward by the market traders was the lack of shade in the heat of the day, and one can quite easily see their point. There is no artificial protection against the sun, such as apartment blocks, as was the case in the centre of town, and as the sea mist rolled out and the sun put its hat on, the traders were hastily adjusting their awnings.

In the confined area in the centre of town, the narrow corridors tended to be reasonably shaded with awnings almost overlapping, but in a larger space you are, quite naturally, a bit more exposed.

By about 11:30, arrivals at the market were on the increase, a steady flow of people trudging their way up the hill, many pushing prams or pulling shopping trolleys. It seems that the bus is not the preferred method of getting to the market at the moment for whatever reason, but maybe that will change when it gets really hot. And very few seem to take their cars, which is also a bit surprising as their is more than adequate parking in the area.

Markets are a social event, but even in this respect there has been a bit of a change. Previously, for the local cafes and bars in the market area, the busy period tended to be quite early on, say 10:00 until 12:00, a sort of breakfasty type of atmosphere. Now, this has become more of a lunchy event, not much happening before 12:00.

One of the main differences in this respect is that there is only one bar/cafe in the area, Genesis. Andy and Jackie do a splendid job, but many are used to a choice of at least half a dozen stopping places as they wander round.

Things are picking up by all accounts, albeit slowly, and the summer should see the number of visitors increasing quite considerably, but my overall impression was that there was ‘something missing’. Can’t quite put my finger on it yet, but that was my impression anyway. Others may disagree.

The walk back from the market, being downhill all the way, is quite painless and pleasant, unless you happen to be laden with heavy shopping of course. Although I chose to walk back, I must admit that I did not see another bus apart from the one which brought me to the market in the first place. Wasn’t particularly looking, admittedly.