The new Rio Chillar walkway has been in the news recently, the Council complaining about deterioration after only a short period of time. The problem appears to be that, until all the post-construction problems have been suitably addressed, the walkway does not actually become the responsibility of the Council until it is officially handed over.

As a result, the Council is not carrying out any of the normal services, such as cleaning and maintenance. So, where better to go for a wander on a windy day, check out what’s happening?

Starting at the beginning seemed a fairly logical step, so down past the petanca courts in Parque Verano Azul and I was off and running. Well, walking. 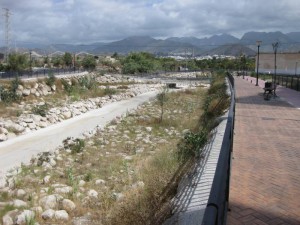 The walkway has been under construction for several years now, and was even restarted after The Great Flood of September 21st 2007, so it would be a great pity if it was allowed to fall into decay before it really got started, particularly through political squabbling.

Anyway, we’re off. The general appearance of the walkway itself is very good, and makes for a very pleasant stroll. The first section, passing Parque Verano Azul on your left, is clean and tidy, benches intact and no grafitti. The actual riverbed is getting a bit covered in weeds, but no doubt that will be properly landscaped as per the published plans. Past the unfinished pavillion – another delayed project, bone of contention and a bit of an eyesore – and even all the waste bins have fresh binbags, so someone must be doing a bit of cleaning!

It will obviously make a tremendous difference when there is a bit of water in the river, should put the icing on the cake. One assumes that it will be a permanent flow rather then just an ‘escape’ for any rains or floodwaters.

Looking at a concrete riverbed is not exactly the most thrilling or aesthetically pleasing sight in the world.

First bit of dog poo, just the one though.

Onward and upward, past the new wooden bridge, and still all is clean and tidy. On the wall at the school, the first bits of grafitti.

Across the road and back onto the walkway and the first thing to notice is that the pools of stagnant water have disappeared. The riverbed is as dry as a bone. However, as we enter the residential area, and the first signs of ‘irresponsible behaviour’ referred to by the Council. In the whole of the first, long stretch of the walkway, just the one small pile of dog poo.

Now, though, it is every few metres, becoming more and more as we head towards the end of the walkway and the beach.

As we reach the last 30 metres or so, it becomes a veritable minefield.  Not a pleasant sight and in the summer it would be not a very pleasant smell either.

So, here we are at the end of the walkway and it certainly is a pleasant stroll (apart from the poo) and, hopefully, will only get better as time goes on. The potential is certainly there.

Leaving the walkway and heading up the road/track to avenida Mediterraneo, the verges on both sides were also rather heavily covered in quadruped droppings.

Better than on the pedestrian area I suppose!

I must admit that I had expected to see more ‘deterioration’ after reading the Council complaints but I was not expecting to find as much dog poo as turned out to be the case.

Here’s the video covering the entire length of the Rio Cilllar walkway for good measure.