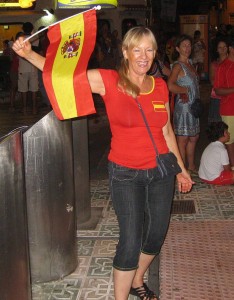 The scenes were similar all over the country as Spain fulfilled their dream of winning the World Cup, always having been regarded as the ‘great under-achievers’ on the world stage.

Plaza Tutti Frutti in Nerja was packed with people watching the match and thousands took to the streets to celebrate the well-deserved victory.

Spain only conceded two goals in the tournament

Spain now join Brazil, Germany and France as the only teams to win both the World Cup and their respective continental cups.